Today must be the day for prodding – two of my friends have requested that I get off my derriere and update the blog. Actually, I’ve been thinking about writing a post for a little while, but I wanted the last Christmas gift to arrive at its destination. Yes, you read that correctly. I got seriously behind in November due to a lingering flu bug and then was more than a little crazy in deciding to make sweaters or hats and mittens for each of the grandchildren for Christmas. As well as the woven kitchen towels for my mother and new daughter-in-law. When I went to hem the towels for the last of these, my sewing machine started acting up, so off it went for a servicing. But they have finally arrived at their destination and I can share them with you.

After the striped warp of the last project, I decided to keep it simple and do one colour. I settled on a natural cotton with brightly coloured weft in a mixed twill pattern. This seemed to be a good approach as the kids will be moving in the near future, so their kitchen colours will likely change, and it will provide me with something new to try. I attempt to plan each project so that I learn a new skill, hopefully without getting in over my head. For the most part, I was successful, though I did discover an issue well into the first towel.

How odd. Where did that come from and what is it?

It took me a while to figure out that it was some kind of dirt that apparently was in the eyes of the heddles. Weird, but I hadn’t woven anything that wide since I got the loom, so who knows how long it had been there. Fortunately, I also discovered that it easily washed out. Phew! this was a five yard warp and the idea that it was going to be ruined from the beginning was not a welcome one. This yellow towel is probably the least successful of the batch. With the natural warp, it just kind of lost its impact. As in the previous project, I varied the treadling for each towel so they are somewhat different, yet still a set. 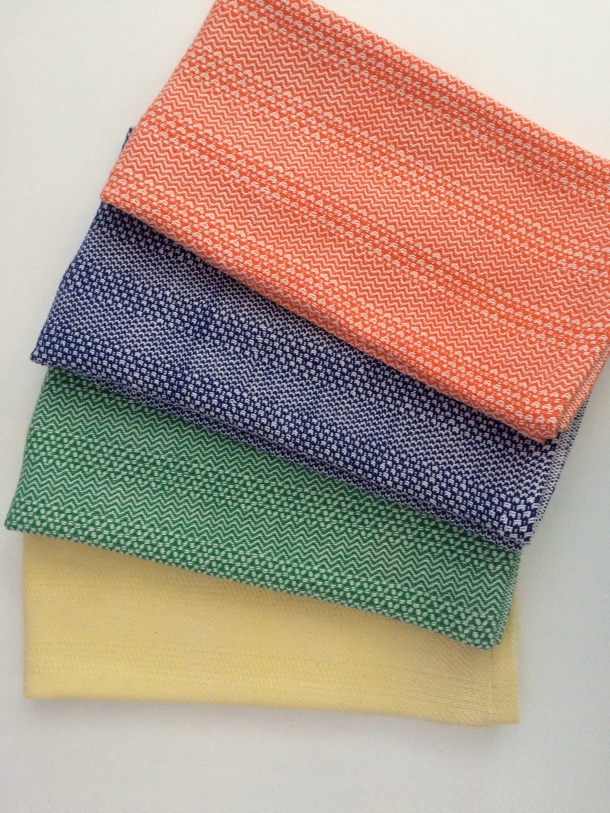 My daughter-in-law is thrilled with them, which makes me very happy.

So what else is new chez moi? I’ve been spinning and knitting, as usual, though nothing is ready for a grand reveal. Another project hit the loom this week and it zipped by so fast, it was almost as if it wove itself. More tea towels, primarily because I wanted one for a gift package. When I wash and press them, I’ll post some shots. The others will be the start of a collection that will eventually result in an Etsy shop. There, I said it. I’m planning to take my fibery obsessions to the wider world and hopefully someone might buy my work.

In other news, spring has finally arrived in the Ottawa region! It was beginning to feel as if it would never come. We had a few flakes of snow the other day, but I’m sure that was a mistake. After all, we’re into April. Spring flowers and all that, right?

Posted in Uncategorized. Bookmark the permalink.