One year ago this week, my husband and I were on the most fabulous vacation ever. I had a blog post almost ready to publish and got busy with something else, forgetting to finish up. This seems an appropriate time, as I reminisce about pain-free activities and the carefree feeling of cycling through the French countryside. So here goes:

Can you see the happy?

It took months of exploring options and discussing to figure out the perfect way for the man and I to celebrate our thirtieth wedding anniversary. After all, one doesn’t do this every year. As duty called the man away for the last two significant anniversaries, we thought it high time to celebrate in style. A friend suggested combining our love of travel with that of fitness, something both of us participate in regularly, and consider a cycling tour. Hmm. An interesting idea, though aside from spinning class, it has been decades since my bottom spent any time on a bicycle seat. Plenty of online research ensued, both to find the perfect location for our holiday and the tour company that would provide us with the experience of a lifetime. And the training began. Oh boy, did the training begin! But it was worth every second as we were well-prepared for what awaited us. The company recommended by our friend, The Chain Gang Cycle Tours, offers cycling holidays in Italy, France and Devon, UK. We had visited Provence briefly a number of years ago and have always wanted to return, so it was a logical choice.

I was more than a bit nervous as we set off from our charming pension in Avignon. Though we had spent months in preparation, I was unsure of my ability to keep up with the others as I was perhaps the least experienced rider of the group. And I was also leery of cycling in traffic. My fears proved unfounded as the French drivers were courteous and politely shared the road. My confidence increased with the realization that I was among the fitter members of our small group and would have no trouble handling the pace. We started with a fairly flat route from Avignon to Chateauneuf de Pape, where we had a lovely lunch. (Did I mention that the food on this trip was incredible? Kudos to Bernard and his team for their excellent research.)

We then headed to what would be the first winery of the trip for a tasting. The floor of the reception area has some transparent bits to show the “soil” that the renowned vines of Chateauneuf du Pape grow in….small boulders to you and I. After a sampling, we hopped back onto our bikes to ride to Orange. Altogether we cycled a smidge over 43 km, a nice warm up for the rest of the week. Orange boasts a spectacular Roman theatre and triumphal arch, both UNESCO World Heritage Sites, which we toured the following morning before resuming our tour. Very cool!

The second day of cycling takes us into Languedoc, on the other side of the Rhone river. Our goal is the medieval town of Uzes, some 50 km away, via the back roads that run through rosé wine region. Our dinner in the old town taverne just happened to be one of the best meals of the trip. The courtyard setting was magical and the food incredible. Yes, there was local wine, as there was with every dinner throughout the week. Unfortunately, my photos fail to do any of it justice.

The next day is a slightly longer route, 57 km, from our hotel just outside Uzes to the port of Beaucaire on the Rhone. Here is a shot of the gang at our coffee stop en route:

We set off the third morning along tiny back roads that one would never find without a guide. The highlight of the day is our picnic lunch alongside a Roman aquaduct. The scenery around the Pont du Gard is nothing short of breathtaking. The aquaduct itself is 275 metres long and 48 metres high, and is another UNESCO World Heritage Site. I confess to quite a thrill as I cycled my way across it.

From the Pont du Gard 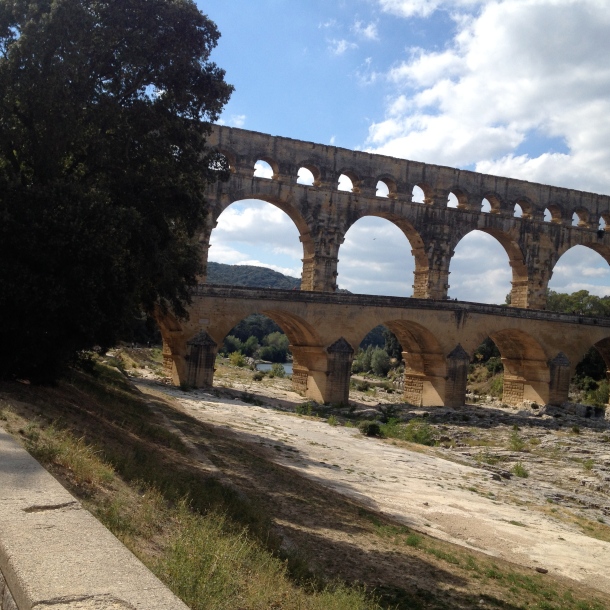 Late in the afternoon, we arrive at our destination in Beaucaire, with time to spare for a swim or relaxation before dinner. Another amazing meal was enjoyed, appropriately so because we are celebrating a birthday, complete with a surprise sparkling dessert.

Happy birthday to me!

The next day of cycling sees us ascending some rather steep hills as we head across the Rhone and into the Alpilles, our sights set on Les Baux de Provence. The long climb up to the fortress was brutal, but we all make it without suffering the indignity of walking our bikes up. Every single breathless moment was worth it though. 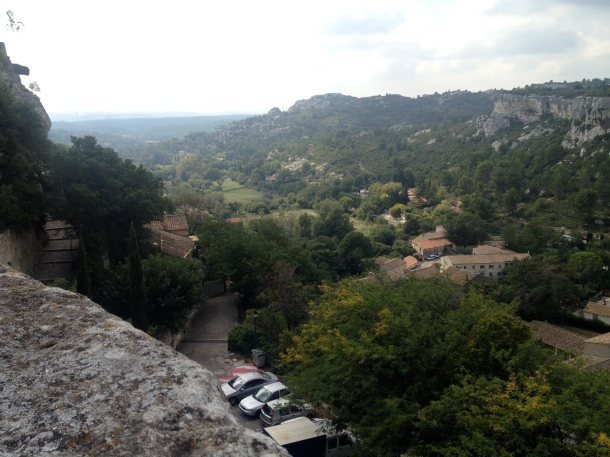 Well worth the climb! 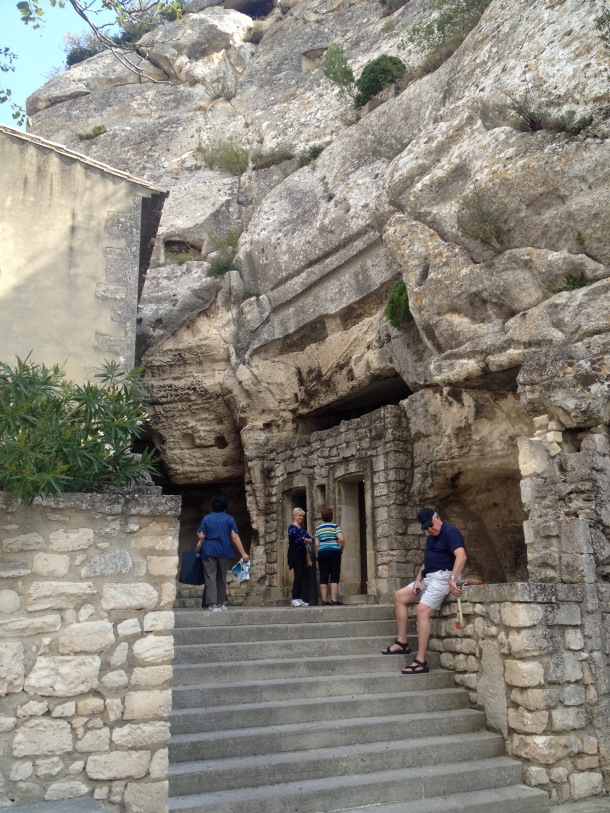 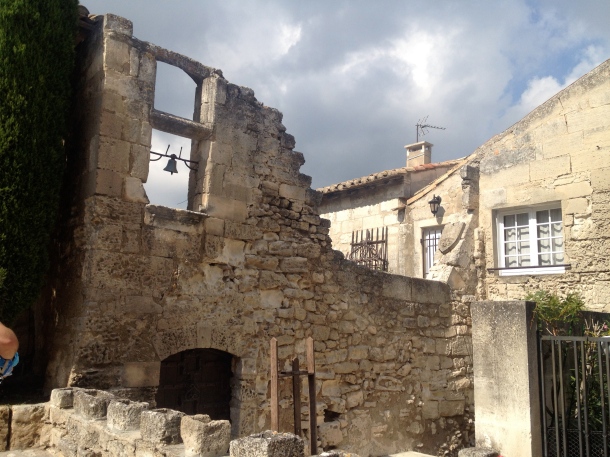 Later in the afternoon, we stopped at Domaine Mas de la Dame for a tasting of their outstanding wines. This is the winery immortalized in a painting by Vincent Van Gogh when he travelled the region in the 1880’s.  We would see a number of plaques commemorating the sites of specific paintings done by Van Gogh, particularly near Glanum where the asylum was located. Glanum itself was incredible and we spent a happy bit of time wandering the site of the ancient town. From there, we rode into St. Remy en Provence to spend overnight.

Day five of the tour is a long one….60 km of cycling. In a hilly environment. I’d thought the road to Baux was tough, but it had nothing on the climb into Rousillon at the end of the day. Talk about sore legs! Our rest stops in the sleepy villages of the Lubéron yielded some interesting exploration, as one of our members was doing a little geocaching en route. One such cache led us down a back alley that seems to take us back in time.

The ochre cliffs of Rousillon seemed to rise up from nowhere, after a long steady uphill climb in a forested area. Jaw-dropping scenery no matter which way one looks!

Yes, it really is that colour. 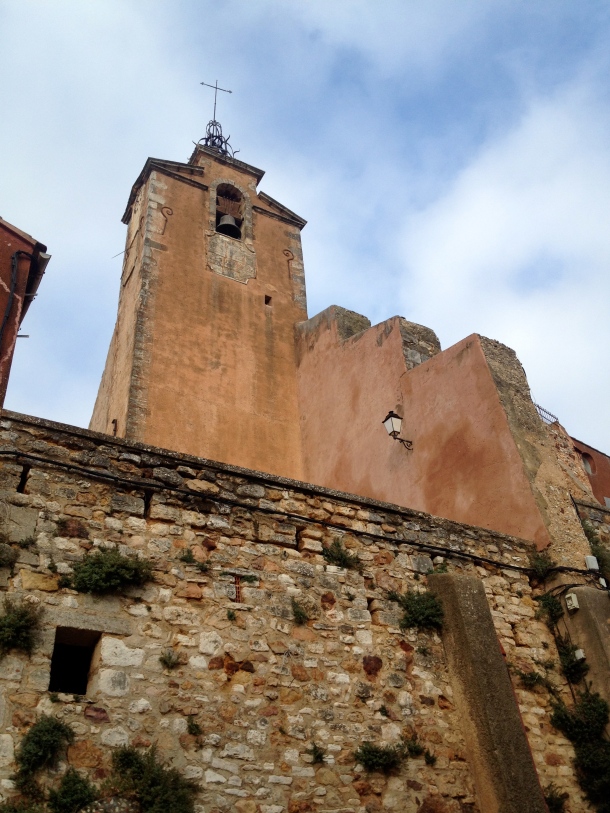 Of course, once you ride up, there is the inevitable coast down. It was fantastic….until you saw the next hill rise up ahead. The climb to Gordes was only doable because of a night to recuperate. I mean, seriously! Look at that hill:

The reason for smiles is that speedy return to the bottom. (Though I’m afraid that I’m a bit of a chicken and hit the brakes when the speedometer reads 50 km/h!) We are only ten kilometres into our last day of cycling at this point. We still have over 50 to go. One of the highlights of the day is our stop at Isle-sur-la-Sorgue, an absolutely charming town located amongst many river channels. 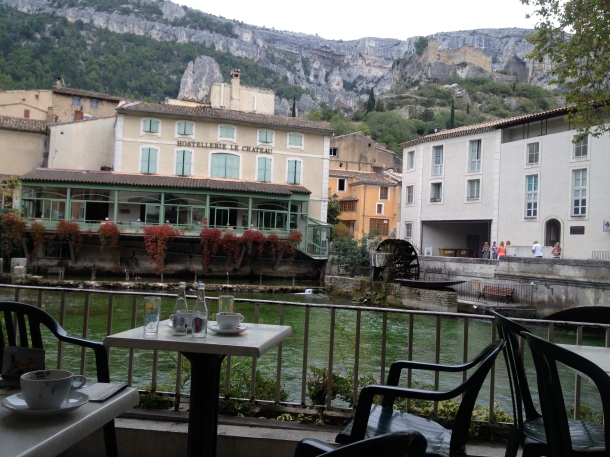 We enjoy a lovely saunter along this part of the river before heading back to our bikes, on our way back to Avignon. The quiet roads give way later to bustling city streets as we enter the outskirts of the former Papal centre. Wow! I had no idea that Avignon was so large. I would have liked to have had more time to explore, but our arrival in mid-afternoon only gave us an opportunity to check out the old part of the city in the vicinity of the Papal Palace. 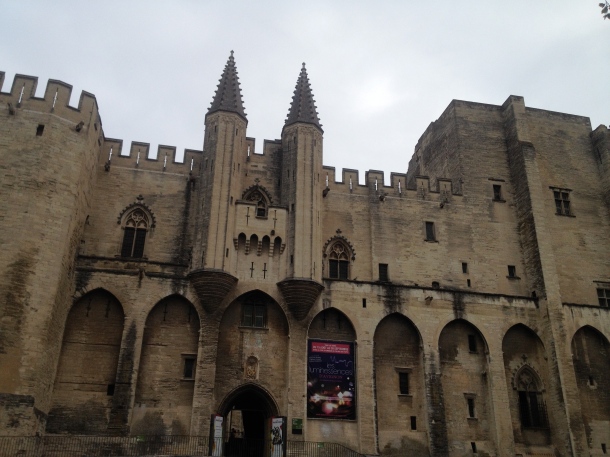 The Palace itself is most impressive. Built in the fourteenth century, a total of seven popes were based here. We did walk through the beautiful gardens that form part of the grounds, from which we could see the bridge immortalized in the childrens’ song.

After taking a refreshment break, it was back to the bicycles to ride in rush hour traffic across the river and up the hill to Villeneuve les Avignon and our lodgings for the night. The great bike adventure had come to an end. If you are interested in seeing a map of our route, check here. According to the little odometer on my handlebar, we travelled a total of 310 km over the six days. Not bad, eh?

This was a fantastic trip in all respects. The route was well-planned so that all could handle the rigours of the terrain with a modest fitness level. Accommodations were well-researched, comfortable, and clean. The food was amazing – lots of regional specialties, variety, and local wines, and the lunches alternated between restaurant food and picnic fare that we picked up in villages along the way. The weather was perfect, not that anyone could have done much to influence it beyond appropriate scheduling. Finally, the company of our fellow cyclists was engaging and fun. I would highly recommend considering a cycle tour as an option for a vacation.

In fact, I would very much like to plan another one. The big question is: where?