The Joys of Being a Tourist

How much fun it can be to play tourist in your own city! Over the past month, we have had the pleasure of visits from two sets of friends, hailing from different parts of North America. The first friends to visit, from Vermont, bicycled from Vienna before taking off the lycra and enjoying the sights of Budapest. Since the Buda Castle Wine Festival was in full swing when the arrived, naturally we headed there first to sample all sorts of vintages from various parts of the country. We tried whites, reds and rosés, finishing with some lovely sweet dessert wines that are the specialty of the Tokaji region of the country. And yes, we purchased several bottles to enjoy later at home. One of our favourites, a kékfrankos variety from Villányi, has already disappeared. Oops! We had a number of amazing meals, as our friends are experts in sniffing out the best culinary treats anywhere – they seem to have a sixth sense in choosing restaurants. A tour of the incredible opera house of Budapest was also on the agenda. Unfortunately, we weren’t permitted to take photographs inside, but I did get a shot of the ceiling of the entrance archway: 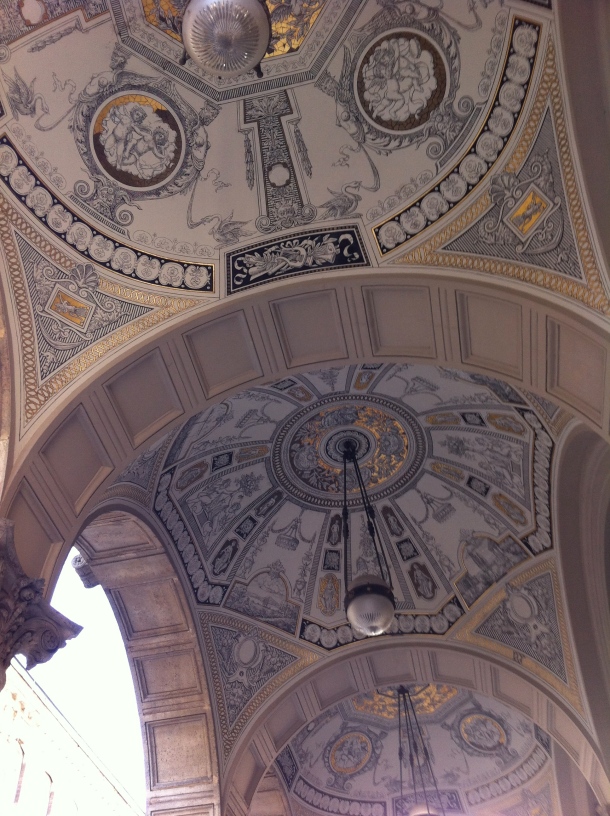 Compared to the interior, this is positively understated. But stunning nonetheless.

This week, a long-time friend from Alberta paid us a visit. Now I really got to play tourist….I walked the city with her almost as much as I walked in Paris a week ago (I’ll talk about this later, I promise). We toured around on the Hop On, Hop Off bus and took a boat tour on the Danube. I learned some fascinating tidbits of Hungarian history and ate some wonderful traditional dishes. Phew, I’m tired just thinking about all the running around!

In between playing host, we took a holiday ourselves. We completed a bicycle tour of Provence and then spent five days recovering in Paris. Now we have to get back to real life. The rest of October is going to be pretty dull in comparison!