A Celebration of Folk Art

A couple of months ago, I saw a photo on a Facebook friend’s feed. It was in Hungarian, so I had absolutely no idea what the event was, but in the photo I saw yarn that appeared to be on a loom, so I did a little investigating. A festival of folk arts, here in Budapest? Really? And the theme for this year is wool? Oh yes, I am definitely interested! It was held last weekend and turned out to be the most inspiring event I have attended in years. It took over the entirety of the Buda Castle grounds, including along the ramparts and down the street that snakes along the side of the hill outside the castle walls. I have never seen an event so large here. Or so well-attended. We went on Sunday, the second day, and were so blown away that a return visit was mandatory. 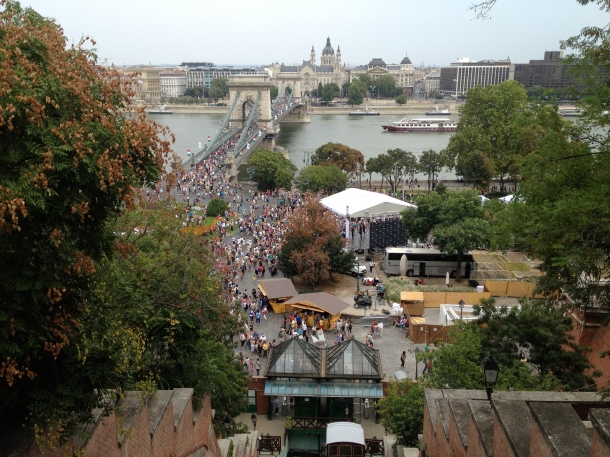 View from halfway up funicular to Clark Adam Ter. There is a dance troupe on the stage.

According to the brochure, there were over 800 artisans displaying their wares. What I didn’t realize was that not only would many be in traditional costume, but many were actually demonstrating their prowess at their art. Spinning, weaving, embroidery, felt making, woodworking, shoe making, metal work, pottery….the list goes on and on. There were even handmade musical instruments. I watched fashion shows and demonstrations of traditional dance and music. Those two days of walking around the castle grounds will be inspirational for months to come.

Photos? You want photos? Well, I did take rather a lot of them. 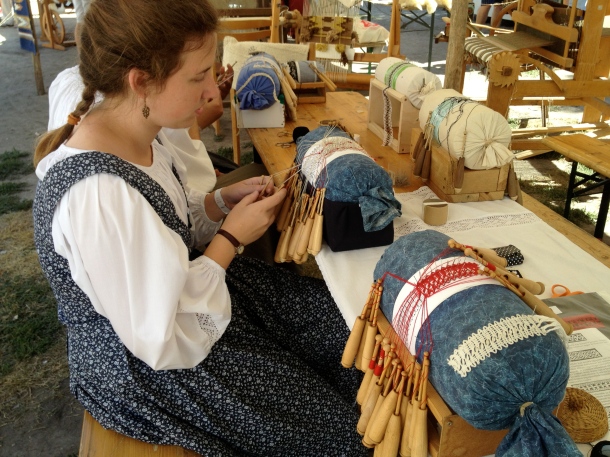 This potter was wearing the most fabulous embroidered shirt! 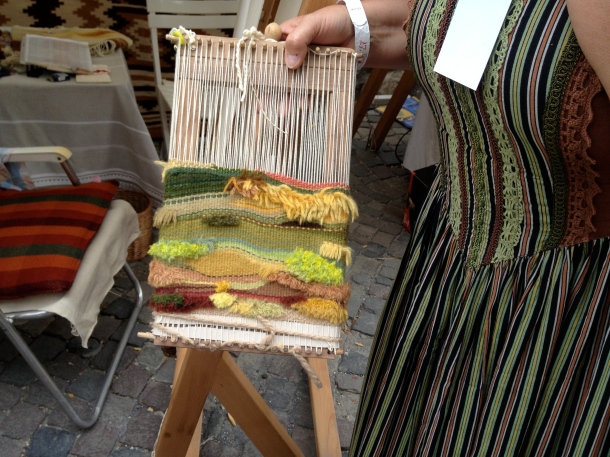 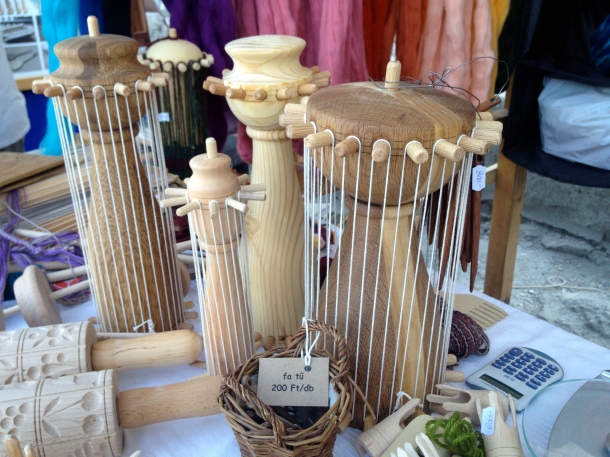 I was particularly impressed with the craftspeople who managed to take a time-honoured craft and move it into the present day. Love the clothing. 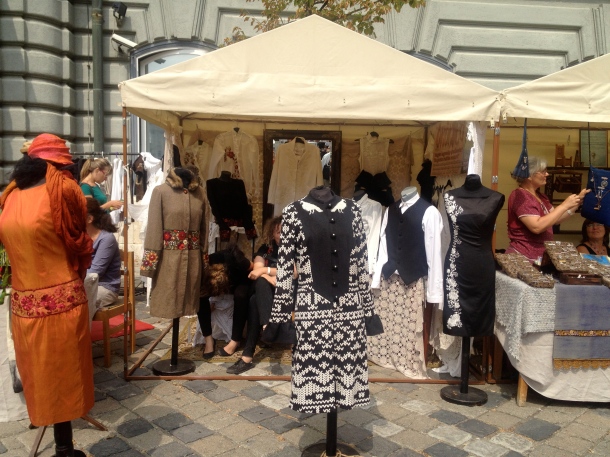 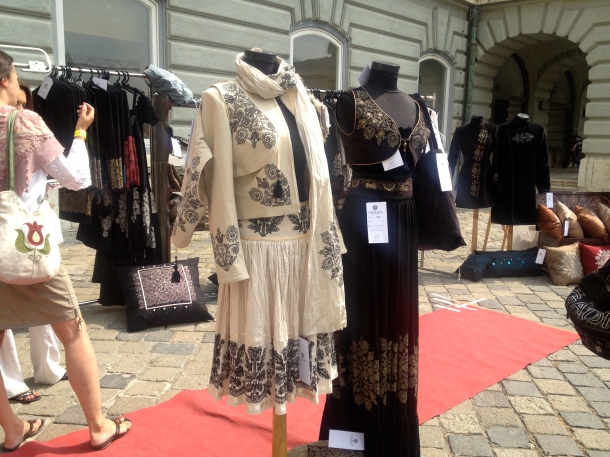 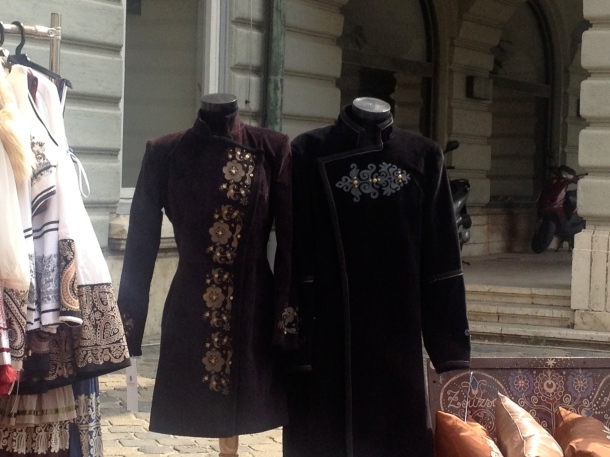 And the furniture. If I didn’t have a lovely dining set, this would be in my house now. By Canadian standards, it was cheap! 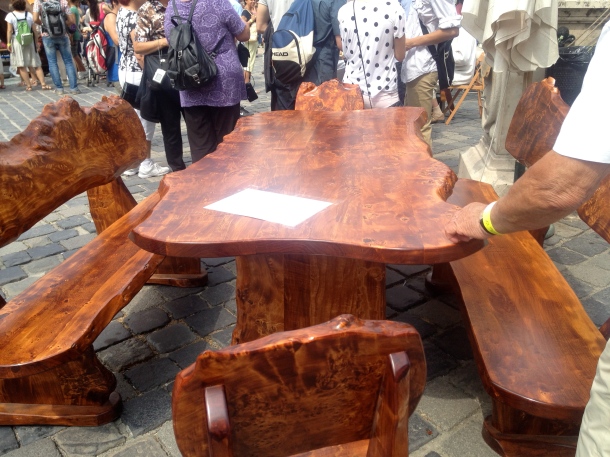 I have many more photos to show you, so I’ll stop there and reorganize myself. Suffice it to say, I am very sorry that we only discovered this event at this stage in our posting. By the time it rolls around again next August, we will have moved away from Hungary.

Posted in Arts and Crafts, Spinning, Travel. Bookmark the permalink.

Yeah, I know. It has been months. I’ve thought about writing, honest I have. There are even two drafts written about trips to Rome and Prague. But then winter intervened. Not just “winter”, but the gray, icky, wet winter that just wouldn’t end. Even the SAD lamp wasn’t helping to pull me out of my funk. And then I just got busy.

So what have I been up to lately? Spinning up a storm. The annual Tour de Fleece competition on Ravelry coincides with the Tour de France, so we’ve only just finished that a couple of weeks ago. I did lots of spinning. Maybe not as much as last year, but still quite a bit. This is the product of my spinning wheels: 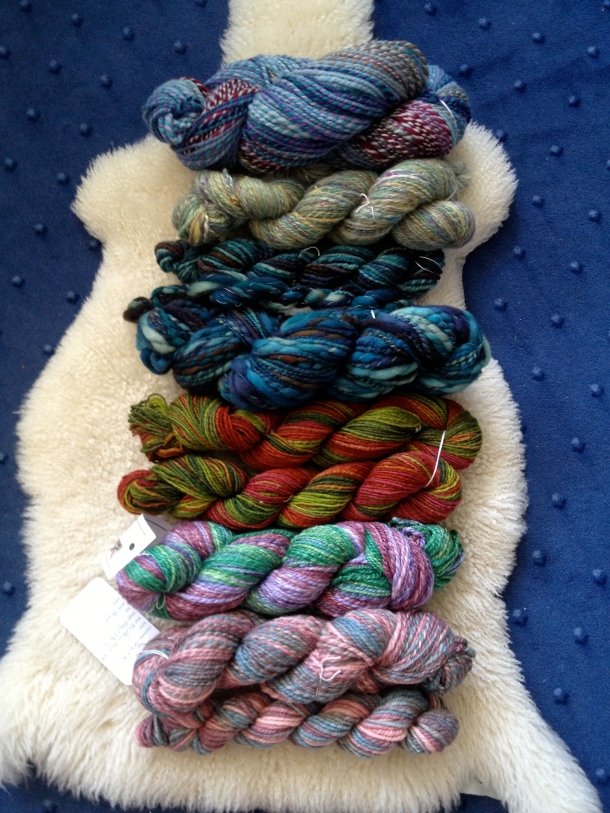 My spindles were also pretty busy. 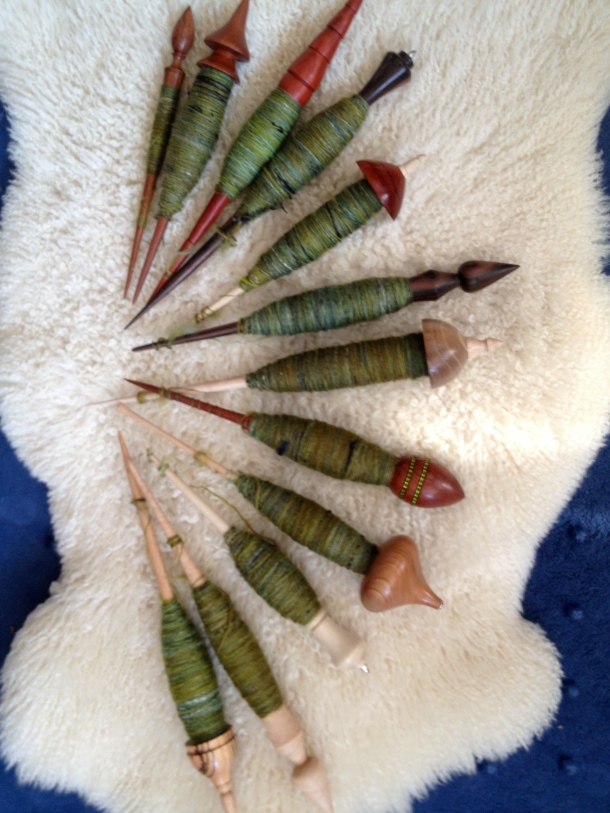 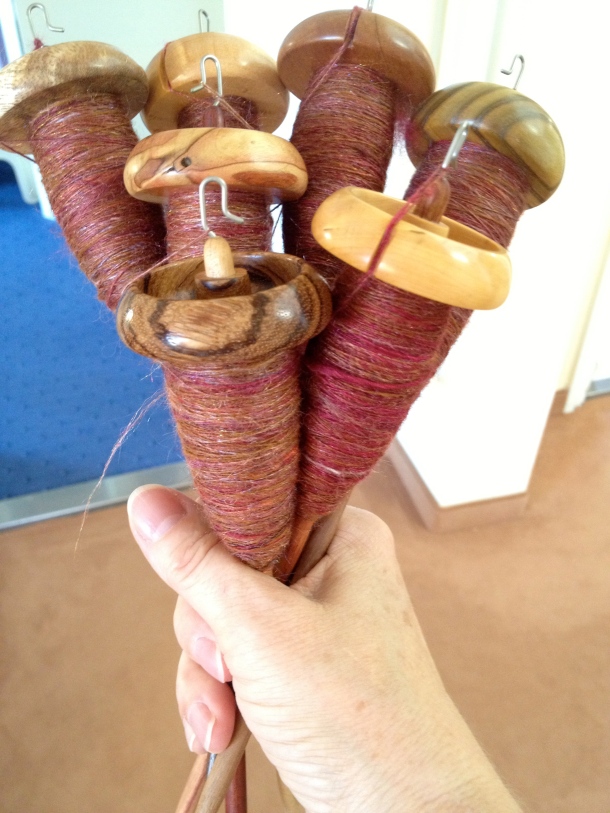 I’ve made several pairs of socks, a shawl to give to a friend who visited me, and I have both a sweater and another pair of socks in progress. I’ve read several novels and work out at the gym at least three times a week. Phew! I’ve been busier than I thought.

We bought new bikes a little over a month ago. My old one was just giving me too many problems, despite having been to the repair guy more than once. Supposedly an 18 speed, it only would shift into 6. And the frame was a little off. A teenager once borrowed it without telling me and was in an accident. Sigh. So I bought a lovely new Trek bicycle, a hybrid model. So far, I’ve put almost 200 km on it….would be more, but as I tend to overdo things in the gym, pain gets in the way. It isn’t flat here, by any means. We are working up to much longer and more frequent outings….and we’ve sealed the deal by booking a cycling holiday in Provence in late September. The tour company says that you needn’t be über-fit, but I have a fear of showing up and being the slow-poke of the group. That would be horrible!

We are in the middle of a heat wave here, so I’ll raise my glass of water to all my faithful readers who have come to check up on me! I’ll get back at those drafts and see what lovely photos of our trips I can put out there for your enjoyment.